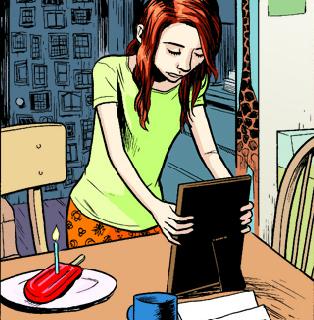 Penny: Keep Your Head Up is a short comic giving a glimpse into Penny's private life. It is on Dark Horse Comics Myspace page, in issue number 23.

Summary
This is another comic book written by Zack Whedon for Dark Horse comics featuring a character from Dr. Horrible's sing along blog. The comic partially explains part of Penny's personal life and gives some explanation as to why she is still single.

Dr. Horrible - Appears briefly getting beaten up in the park

Caring Hands - The name of the homeless shelter that Penny works at is called the Caring Hands Homeless Shelter and was possibly her inspiration for her song "Lend a Caring Hand".

Retrieved from "https://drhorrible.fandom.com/wiki/Penny:_Keep_Your_Head_Up?oldid=4129"
Community content is available under CC-BY-SA unless otherwise noted.