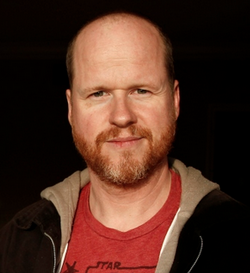 Joss Whedon (born June 23, 1964) is an American screenwriter, executive producer, film and television director, comic book writer, occasional composer, and actor, and the founder of Mutant Enemy Productions and co-creator of Bellwether Pictures. He is best known as the creator and showrunner of the television series Buffy the Vampire Slayer (1997–2003), Angel (1999–2004), Firefly (2002), and Dollhouse (2009–2010). He co-wrote and produced the horror film The Cabin in the Woods (2012), and wrote and directed the film adaptation of Marvel's The Avengers (2012), the third highest-grossing film of all time. He is also notable for his work in comic books and online media. Many of Whedon's projects have cult status.

In 2008, Whedon teamed up with his brothers Zack Whedon and Jed Whedon, along with Jed's then-fiancée Maurissa Tancharoen to write, compose and produce the musical superhero spoof, Dr. Horrible's Sing-Along Blog. Whedon conceived of Dr. Horrible over the year before and production took place over seven days during the Writers Guild of America strike. The project was freely available online from July 15 until July 20. In September, Dr. Horrible's Sing-Along Blog soundtrack made the top 40 Billboard 200 list despite being a digital exclusive only available on iTunes.[1] The soundtrack was successful enough to pay its crew and all its bills.

Retrieved from "https://drhorrible.fandom.com/wiki/Joss_Whedon?oldid=4601"
Community content is available under CC-BY-SA unless otherwise noted.